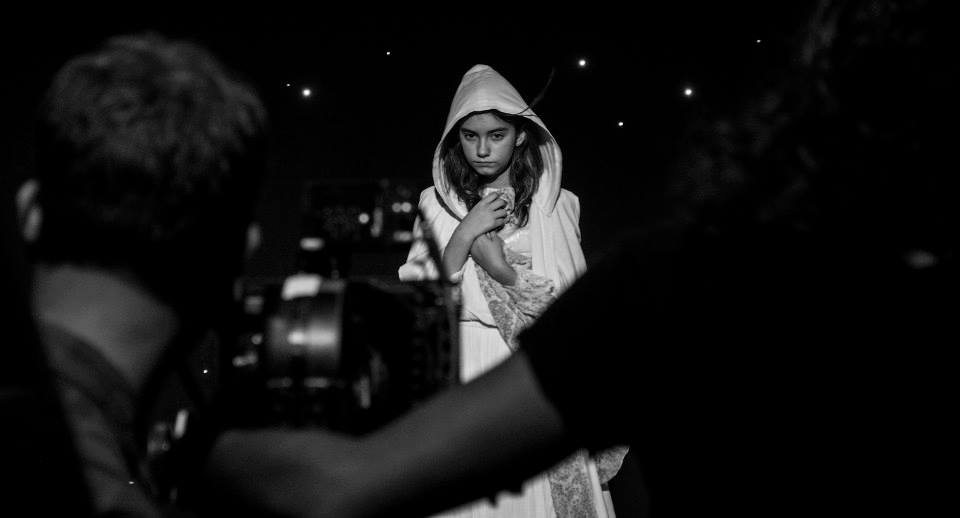 As soon as I saw the 16mm film rolls on set, I felt like I am in a time machine. Analogue film stock is becoming very rare these days because the digital workflow and 3D technology are taking over the big budget productions. At AFI, every cinematographer is expected to shoot one MOS (= ’without sound’) short film on 16mm Black and White material – a 200 feet roll, providing about five minutes of runtime. The cinematography fellows come up with the story and can either direct themselves or ask for support from the directing discipline. I was asked by Nicholas Trikonis, who took also part as a creative producer, to come on board as a director on his MOS project “Mother Moon”. We were highly supported by an AFI production designer, Brittany Elias, who came up with an original setting that she built on the stage and AFI producing fellows Halee Bernard and Brian Mancini, who both co-produced the film for us.

“Mother Moon” is about a young girl, who sneaks into the night, unable to fall asleep without her recently deceased mother. Mourning under the moon’s glow, she is certain she hears her mother’s voice humming a lullaby. Curious to discover the source of the music, the young girl comes dangerously close to a cliff’s edge but is saved by the arms of a woman who has appeared from the moon – her mother. The two dance, enjoying their lasts moments together, until her mother vanishes, her spirit moving on to the afterlife. She leaves her daughter with a greater understanding: that although her mother is gone, she can still find peace in the love they shared and feel her presence whenever she looks toward the moon.

Coming on set in the morning, I could feel the nervous vibe among the cinematography students who build the team around Nick, because the task was fairly unusual. The loader can’t do one wrong move, because otherwise his fellow’s film stock will be unusable – this is very different from inserting a memory card. The camera is operated differently, with the film stock placed just above the lenses – not just a digital chip placed safely inside. The set is lit to look effective in Black and White, not Color. We had one advantage in comparison to the old masters, though: we had a digital monitor where we could see what will be seen on film, so the whole team could see how the recorded material is going to look during the shooting. Also, shooting MOS allows us to give cues during the takes because there is no sound recorded.

The most challenging part for me as a director about the MOS project is the editing in camera, so everything has to be shot in sequence. Once a scene is shot, it cannot be erased and has to be timed diligently. Every set-up is only shot once and has to be perfectly executed. No second chances! To make it even harder, it was my first time working with a choreographer for a two-minute dancing scene that is executed in a one-shot. And has a child in the leading role. Though this ambitious framework probably gives every AFI teacher the creeps, with strategic planning and enough rehearsing time it worked out very well. I am very excited to see the screening of our rough “dailies” material after our Christmas Break, when the film is developed!