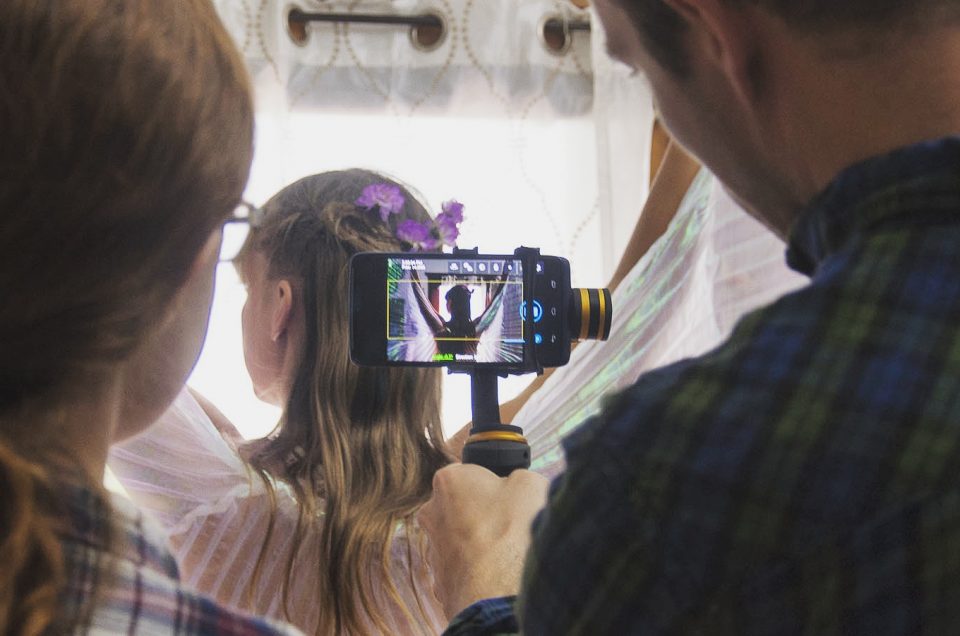 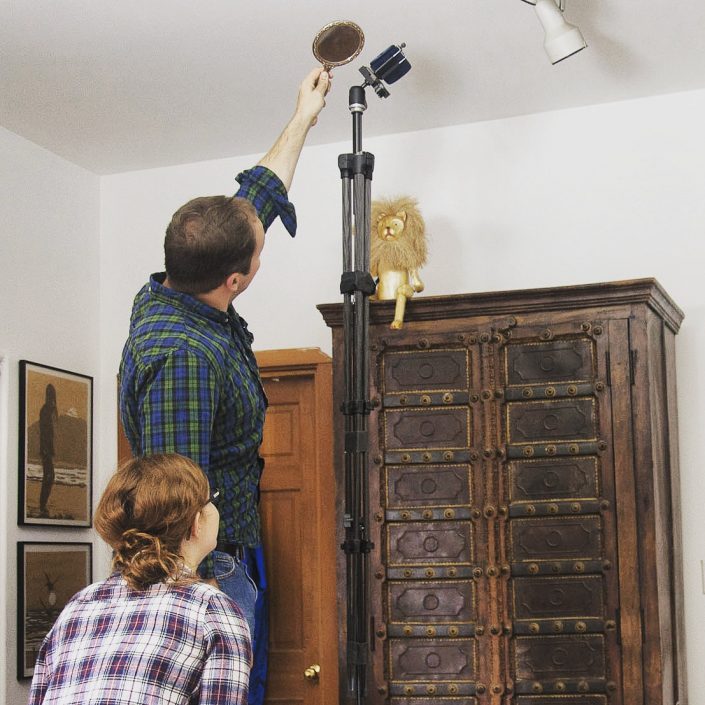 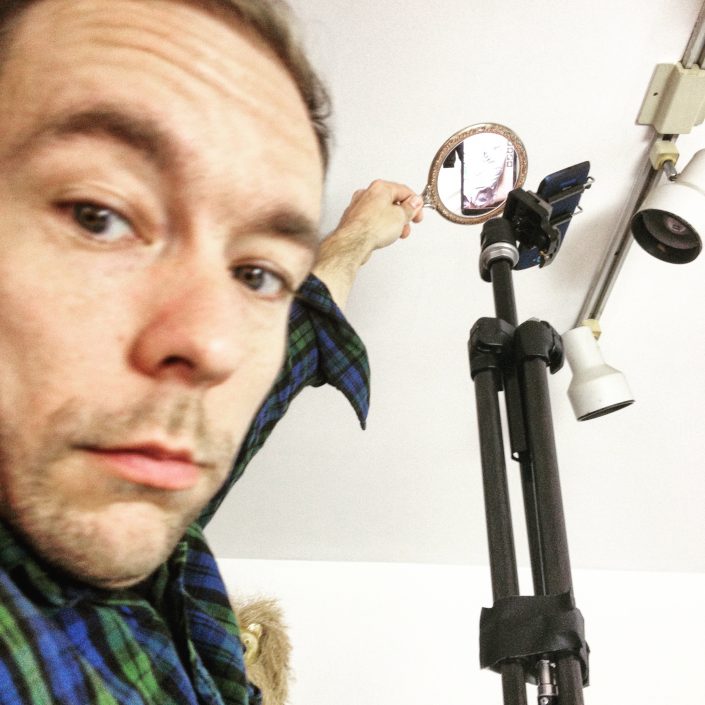 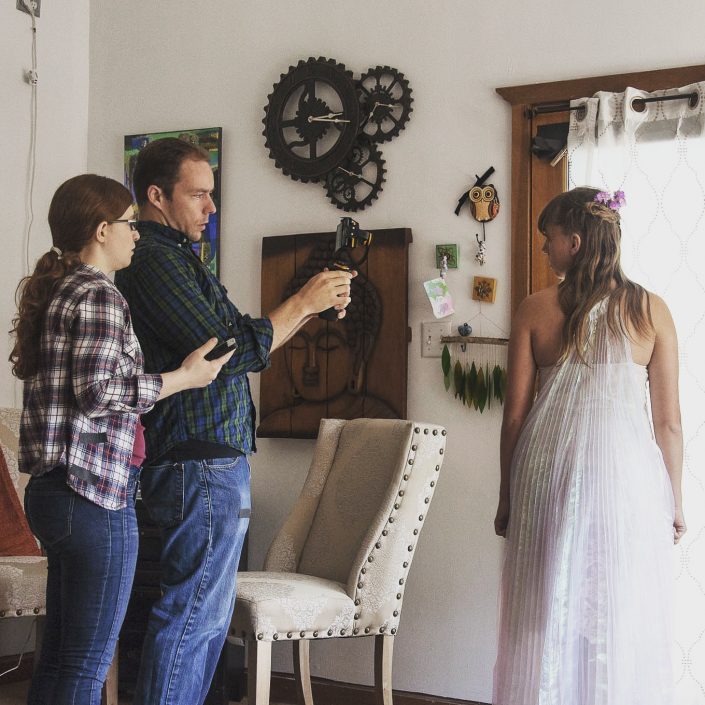 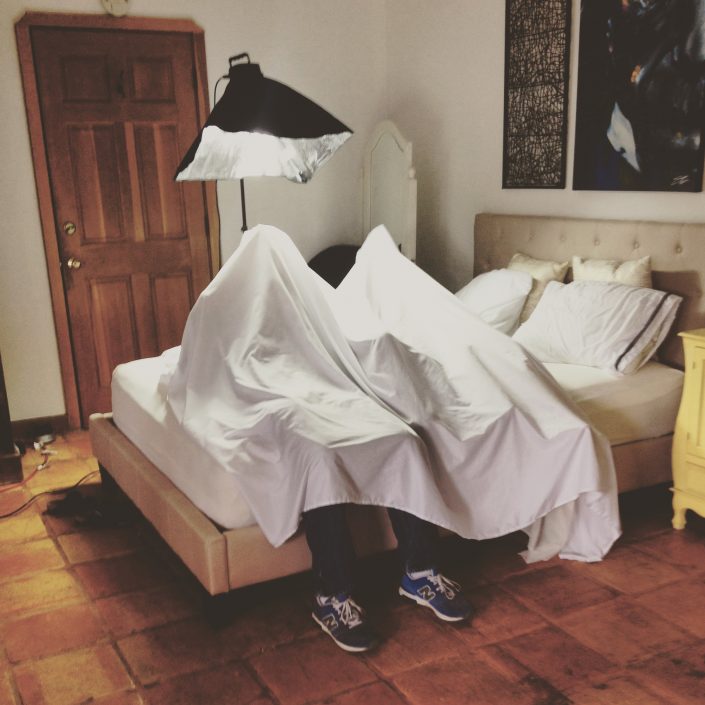 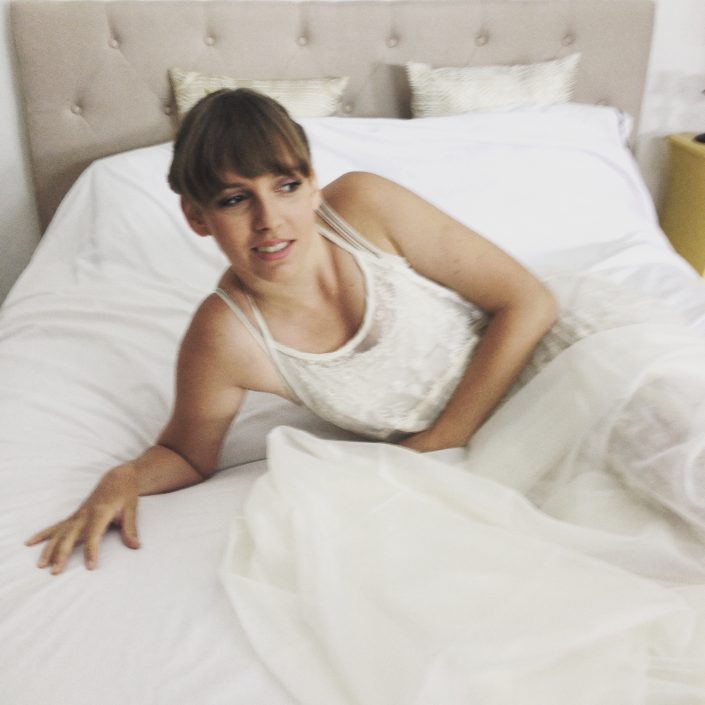 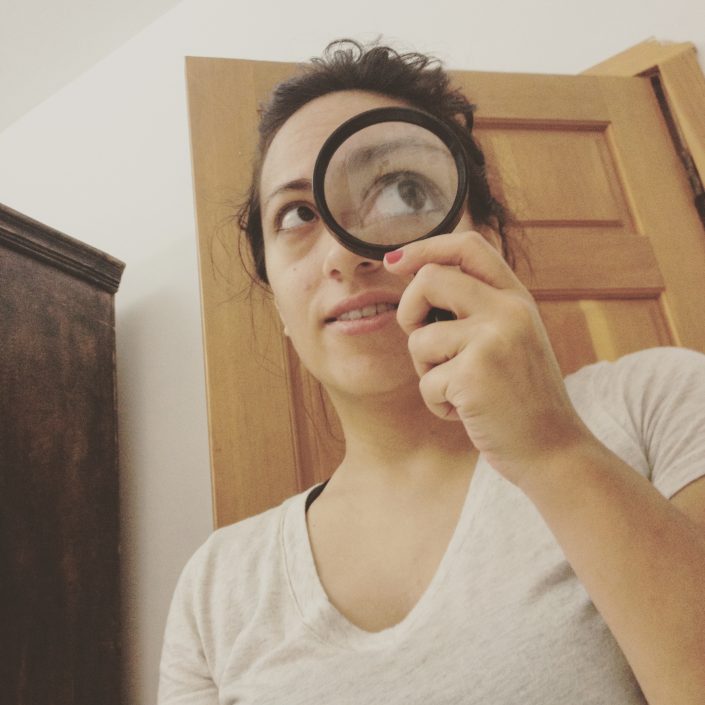 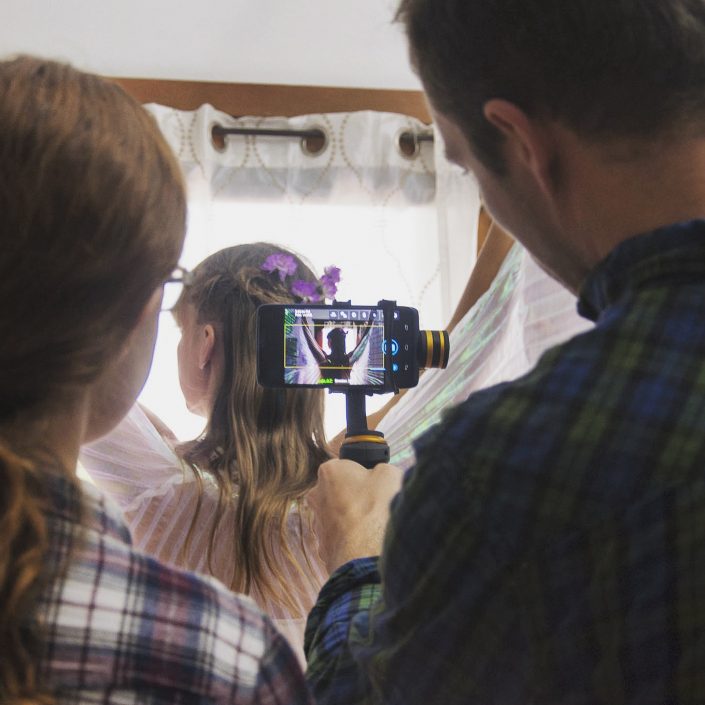 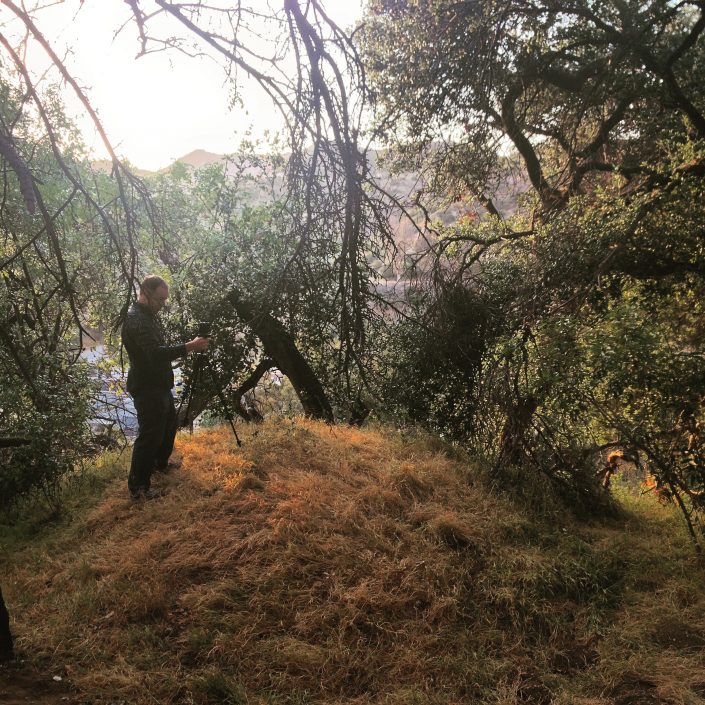 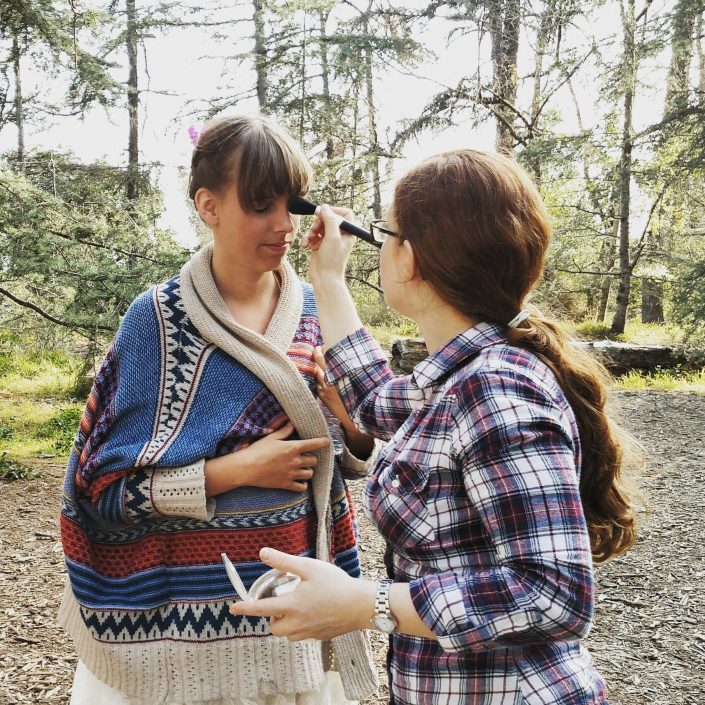 In times where modern technology is developing as fast as the speed of light, new inventions are always inspiring and exciting to try. When I heard about a challenge organized by Qualcomm and the San Diego Festival to shoot a 4-minute short film on a Motorola DROID Turbo phone that records 4K, I had to apply. A few weeks later, I found myself holding this new piece of technology in my small hands, with its nice and flat design. It promised a battery life of 2 days and lots of storage (32 GB) compared to my current IPhone 4S. It sounded perfect for shooting small projects for Social Media and maybe even short films.
From the day I got the phone, I had three weeks to shoot and finish the film. I had already written a script in advance, found my crew and cast, had done rehearsals and now that I had the phone, the most important step had to be taken: Testing. How does the phone react to bright and low light, which settings give the best quality, how is the workflow with apps, editing software, formats, effects and corrections? When the cinematographer Edward ‘Eddie’ Salerno Jr. and I had everything figured out, I couldn’t wait to put it to action.
The planned first shooting day, however, had to be rescheduled, because our main actor and choreographer Juliette Irons was injured after rehearsals for another project, which meant we had to postpone the shoot for another week so she could get better. The anticipation was itching me now like a nasty mosquito bite. We took the time to go over the dancing performances again, perfected the choreography, bought gadgets to enhance the abilities of the phone and rehearsed as much as we could, to save time on the shoot.
Day One of shooting ended up being 5 days before the deadline. But we were determined to make it all happen, and as perfect as we can. Our main actress, Juliette, was very committed to dance for two whole shooting days beside her recent injury, and gave her best, like everybody in our small team of me as a director/producer, Eddie as the cinematographer, Jax Moreno our make-up artist and the two additional dancers Stephanie Smith and Zach Paul Brown.
To make our short more attractive, I had acquired a few gadgets to make the workflow with the phone easier. Besides the obligatory protection case (for shooting outside on location) and the anti-glare screen protector (for shooting in bright sunlight), I treated myself to affordable ‘CamRah’ phone lens kit. With the lenses attached to an easy to apply clip that goes right over the camera of the phone, it was perfect for our flexible style of shooting, following dance performances and shooting in tight spaces, like under a blanket on the bed.
But because the Macro lens had such a close range (we filmed an eye full screen and that maxed out the distance we could go) and the Wide Angle and Fish Eye had such a distant range, we needed another creative gadget to shoot close-ups that had a significant depth of field. The Droid Turbo camera has a nice aperture of f.2 and with that has a great depth of field on its own, but we wanted a more intimate, even more blurred out background for our film. So I bought a magnifying glass at the dollar store that helped us tremendously in capturing the mood, simply by holding in front of the lens. Sometimes you have to be creative to get what you want!
Our cinematographer Eddie never run short of creative ideas, either. He brought a Gimbal stabilizer that could just hold the phone (though made for a GoPro originally) and helped tremendously with the moving shots that followed the movements of the dancers. But that remained our only fancy piece of gear – when the battery ran out on set in the woods, he established the impromptu ‘Eddie-Cam’, holding a light tripod just under the camera and letting it balance itself out while he was moving, which worked surprisingly well. For our top shot over the bed, we built a ‘Mega-Stand’, which was the aforementioned tripod gaffed to a light stand. In order to start shooting and employing the settings, Eddie stood on a ladder with a mirror so he could see the screen. Clever!
After finishing the shoot, I went straight to post-production, which turned out to be very time-consuming because of the large 4K files, something we had anticipated in our previous tests, but couldn’t change. What we hadn’t anticipated, was that Premiere Pro could not handle the correction layer information on the large 4K files. The result was a nasty flicker after hours of exporting that destroyed the film’s grace and flow. Running out of time, I spent day and night re-grading in Speedgrade, my new favorite Adobe program. It comes with a strong rendering engine that takes the burden away from Premiere and is a lot more concise than Premiere’s built-in effects. With Speedgrade, we did not only get rid of the flicker, we also got a much better Color in the overall piece. Like they say, every obstacle during a film shoot is a chance to make your film better! And that was so true for all the obstacles we had to face.

Shooting on a phone was fun because it is very flexible, but due to the fact that it is a phone and not a camera designed for filming, it had a few shortcomings. We had to find an app that would stop the phone from adjusting to light by changing exposure and although we searched all over the internet, we could not find an app to get a manual focus that would stay locked. So it was a little bit of a guessing game where the focus would end up and cost us several takes to get a shot without the phone readjusting. Which in turn used up a lot of 4K data, because it took time to get the settings right, usually the performance duration times two or three, so we could not really profit from the many gigabytes of space on the phone and had to spend a lot of time transferring files through a USB 2.0 bottleneck, because the Droid Turbo is not yet USB 3.0 ready.
All in all, the flexibility and brilliance of the phone is amazing, the 4K quality of the phone unseen and the display outrunning my laptop in watching material with the phone’s strong Qualcomm Snapdragon processor – but if one wants to make the best of this phone for their short film, they will need to plan a lot more time than it takes to set up and shoot with a film camera. In the end, I would say the advantages outweigh the shortcomings, as the greatest asset student filmmakers have is actually time. I am very pleased with the result and still dazzled by the 4K quality the phone offers. Luckily, the phone is mine to keep and there are certainly more opportunities to perfect the workflow and keep pushing the boundaries of this great piece of technology.

In the end, we made it to the best three films and got to have our film premiere at a VIP Screening at the San Diego Film Festival, where our film was screened on a 4K Screen in the Arclight in La Jolla, California, showing it in front of industry professionals such as the VP of the Producers Guild of America, a Development Executive from Paramount and a renowned Film Critic, among others.