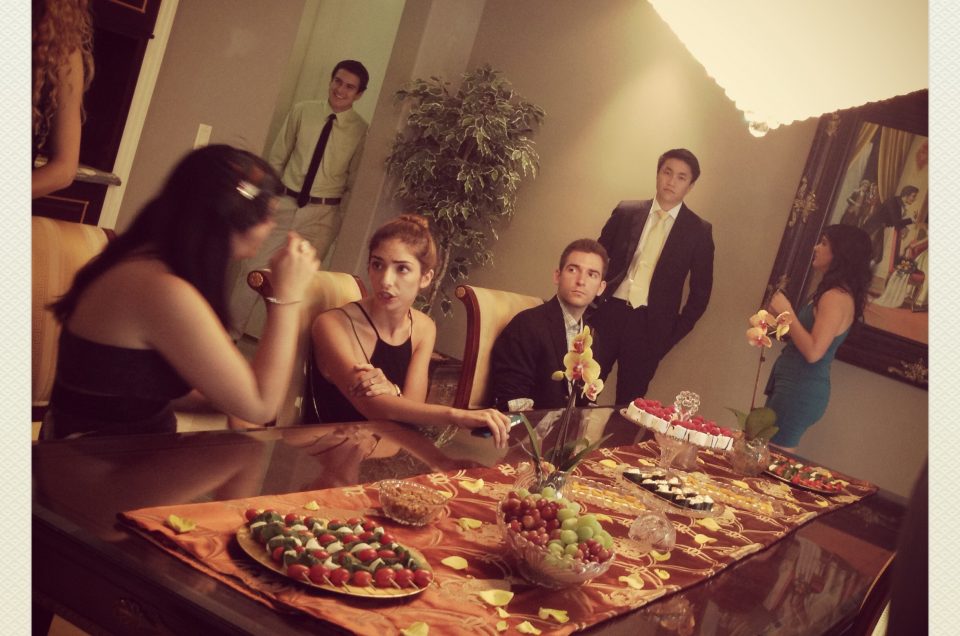 This year, Halloween came with a treat for me instead of a trick: a few days before Hollows Eve, I got to shoot my Cycle One project that I had been preparing since school started in August. And the theme couldn’t be a better fit – the short film “Finger Food” is set at a party in a Hollywood Hills Mansion and is a spooky satire about the film industry life in Hollywood.

It was a pleasure to work with actors from the Screen Actors Guild Conservatory who made the film so much more colorful. For the first time, I was able to hold auditions and chemistry reads before the shoot. Though I was nervous at first, I came to enjoy playing around with the script and see the story unfold in real life for the first time during pre-production. The following weeks felt like a jigsaw puzzle, planning all the little details of every aspect of filmmaking that would add up to a great piece of art in the end. I spent most of my time consulting with every department – the screenwriter for the final shooting script, the producer for budget arrangements, the cinematographer for the shotlist, the production designer for the three dimensional design and last but not least the editor to make sure I am aware of all the coverage we will need to tell the story.

A first is always the most exciting, so I chose a very special project. It goes without saying that this story held calls for great production value with a lot of extras, glamorous costumes and fancy Steadycam shots. But what seemed to be easy in my mind turned out to be quite difficult in execution. Handling seven actors in a one shot Steadycam scene with another ten extras as background action proved to be a challenge for finding the right timing. Also, if you are on an amazing location, you want to make the best use of everything you have – which resulted in intensive lighting and blocking to include every possible angle of our fabulous mansion in the film. It turned out to be a race against time because we only had three out of four shooting days to get all the shots we needed in the mansion. If you are met with a challenge like that you have to be creative in order make your work as effective as possible. This is where I came to value my first assistant director. Making our days and getting everything in the can was only possible because of her strict hour-by-hour shooting schedule and her skills in handling extras – because at AFI, directors are forbidden to direct non-speaking roles. Our successful collaboration was the result of a director friendship at AFI turning into a working relationship!

After the shoot, there was a rigorous editing schedule. Based on the script and the “dailies” – the material that comes to the editor after each day – the editor makes a “first cut”, putting all the pieces together for the first time. This piece is screened in front of the editing class to evaluate where the story has weaknesses or potential for misunderstanding. With that feedback in mind, the actual editing process starts, where I come into the editing room and work out our final cut for four days. After that, the picture is “locked” and goes into half a day of color correction and one day of sound design. And that’s it. Today, exactly two weeks after our first shooting day, the film was screened and approved in front of our core team. It is now ready for the screening in front of the whole first year student body next week! I am very excited to show our work and get feedback about what we can learn for the next Cycle film – which is that is already in planning. The next excruciating teaming process is already happening!

Making “Finger Food” wouldn’t have been possible without my awesome crew of about forty people, who all gave their best on and off set. As I have mentioned in another post, there are a lot of fellow students from all disciplines on my crew that always had an open ear and were happy to give advice when needed. I was glad to be cared for in our big AFI family that was extended beyond its borders with assistants from other art schools in L.A. The size of the crew from our AFI student shoot could easily compete with some of the bigger productions I have been working on in Germany, where the proportions of productions are more condensed. It is a huge privilege to be trained in a way that reflects industry standards, so we are prepared to dive into the professional world right after school.