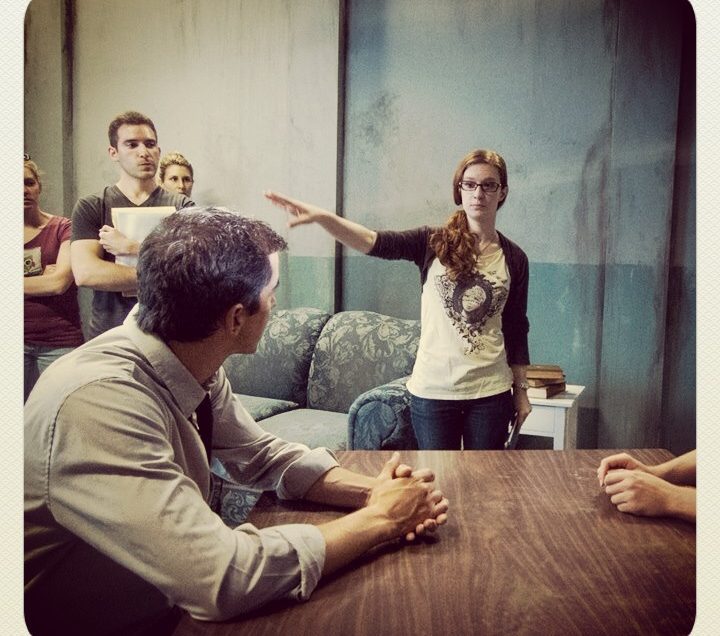 My first AFI shoot – an exercise on collaboration

“BOOTCAMP” – that’s what our first shooting excercise at AFI is called. And it deserves the name, because it feels like you are thrown in the wilderness of a film set, hunting down your favourite granola bar at the crafty table and learning how to work with a group to make it to the end of the day. Not to mention teachers and staff people stepping out of the underbrush and scaring the hell out of you with set procedures you have to memorize. So how do you actually survive bootcamp? What are the lessons to learn here?

Basically, we were assigned a scene vom Kieslowski’s Decalogue that we needed to break down and shoot. There were a lot of goodies that came with our AFI provided survival package: a set which was built and dressed by our adorable AFI production designers, a casting opportunity through the SAG Conservatory books, all the equipment we need (at least what the faculty thinks we should be content with), fellow students who formed our crew and last but not least: fruit and water. One of the most important things to make the best of this basic package is to be prepared for all the hazards you could possibly face, especially the life-threatening factor TIME. Because we only have 4 hours of shooting time per team to cover the whole scene.

On the first half of the day, I was crewing on a shoot from a different team in the same location. I was happy helping out my DP as a clapper and was reminded of my experiences as a PA on various small crews back in the day, which was a lot of fun. But as soon as the clock striked 3 o’ clock, I’m changing personality. I’m the director now, “owning” the set – as the AFI elders like to call it. I need to shift from the nice and inconspicious little girl that marks positions and hops around with that funny slate to a respected leader who has the whole team under her command. To my surprise, it didn’t take much longer than the strike of one more second to switch to that well-known role. The second I am in charge, I switch into auto-pilot mode, going purely on instinct being in a limbo of voices, equipment noise, questions and sideway glances.

Having been pre-warned by the eldest of our AFI tribe, my DoP Halyna Hutchins and me were still ambitious. We planned all these awesome-lit and special angled shots, ending up skipping some because we ran out of time. Nevertheless, we got all the basic coverage we needed and even a little bit extra, because we knew the most important parts of our scene and covered them first. And that doesn’t only count for survival training at film school, I think it should be a universal thought before you start your shooting day. With all the support from my AFI family, I managed to shoot six different set-ups in that particular timeframe (most of them one-takes), which was only possible because of the almost primeval willingness of everyone on set to make the best of what we had, especially our one-take actors! I’m looking forward to move on into the editing room now and I am even more excited to see the other director’s versions of the same scene!!