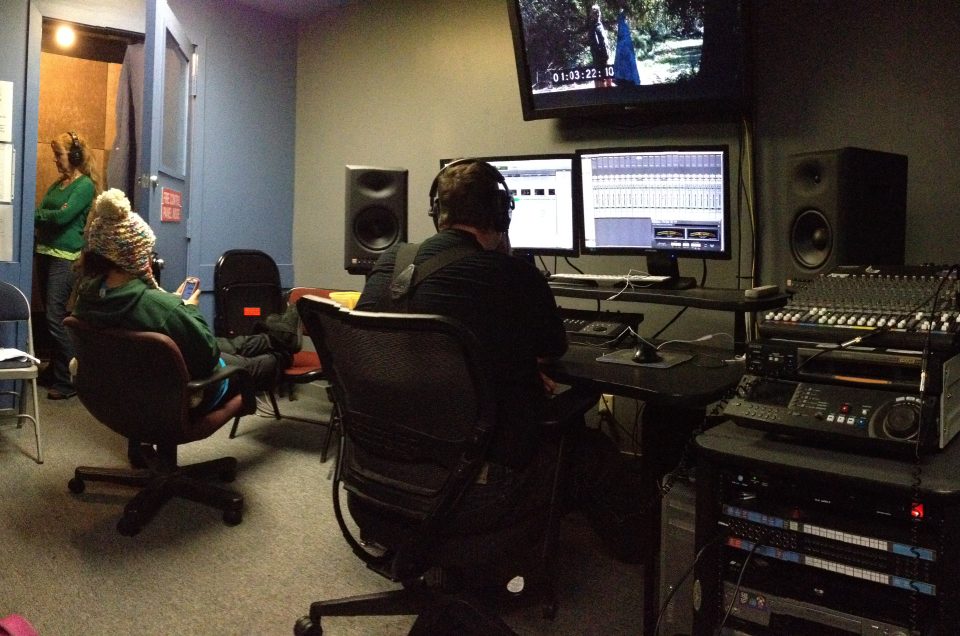 My Cycle Two, “The Lives of Bones“, is in the can! But after every great shoot there is always a greater pile of work: All the pieces that you shot have to be assembled to a whole in the editing room. Editors are not only technicians that abide by the director’s demands – they are storytellers themselves! Editing is the last instance of structuring and visual storytelling and sometimes, films are completely retold in the editing room. That is why at AFI, the editors compose a rough cut on their own, beginning after the first day of shooting.

After every shooting day, the director, cinematographer and producer, sometimes the writer, come in the editing room to watch “dailies”, the footage of the day. Here the different disciplines can point out problems or give comments to the editor. A take out of focus or an angle that is to tight to make the cut work could be a problem. By watching all the takes, the team can discuss how to work around problems or decide to shoot additional material the next day.

During the three days of shooting, the editor starts assembling the scenes that have been shot already. After principal shooting is done, the editor has another three days to polish sound, add library sounds where needed, clean up the cut and add some temporary music to get a feel for the mood and the pace of the film. The rough cut is following the script and the daily log to the editor, as well as the editor’s own judgment on performances. This “editor’s cut” is shown in Edit Analysis, where the whole editing class assembles to act like a test audience and judge how well the story comes across. This is very helpful for the director and the producer, as they can make out problematic sequences and figure out solutions at an early stage.
After edit analysis, the director comes into the editing room and gives the editor notes about the rough cut. Also, problems that have come up in edit analysis can be addressed by the director. This can go as far as cutting out scenes or restructuring the whole story. The editing is done under the supervision of the producer, who comes in by the end of the day to look at the film with fresh and objective eyes and help the director and the editor get a sense of the whole after they had been working on details for the whole day.

AFI gives us five days before we have to “lock picture”, which means we have to commit to an edit and are not allowed to change the picture anymore. This helps the cinematographer to do his color correction the next day. Due to light changes during the day or different lighting from different angles, the color and brightness of certain shots of the same sequence can differ. Also, most films have a certain “look” which can be created or supported in the editing room. Correcting color and brightness helps the audience to feel like the film is one piece and not a sequence of takes shot in the wrong order at completely different places. This correction gives us a feeling of continuity.

After half a day of color correction, the editor is given two days to work on Sound Design and Music. A lot of the atmosphere created in a film comes from background sounds that have to be carefully balanced out with dialogue. At this point we also get a chance to ADR scenes that have gotten unusable sound on the day of shooting, because of passing planes, trains, cars or other distracting background noises. Once the sound design is in a good shape, it is time for the score. In my case, I was supported again by my favorite German composer Sami Hammi! Scored based on the picture locked cut, music can support the atmosphere and emotional journey of the characters to a great extend. Not all filmmakers are aware of its power, as we perceive a film with eyes and ears, so sound and visuals share our attention 50:50.

Once everything is in place, the credits roll and all the technical standards are fulfilled, our little piece of art is put on a tape. Now it is exactly one week after the director came into the editing room. This is a tough time frame for a 15-20 minute movie, if you consider that there are classes during the week that every team member has to attend. It goes without saying that I was very excited once I finished this exhausting week of 12 hour sessions and spending every spare minute between classes in the editing room. Now we have a film: “The Lives of Bones” is ready to screen in front of the whole first year student body and the faculty!