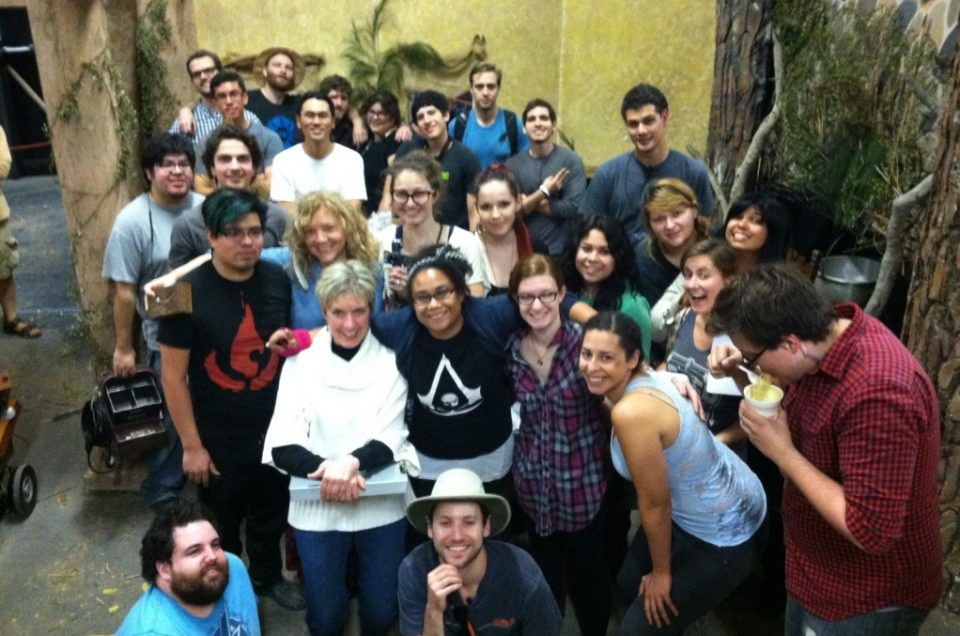 Shooting “The Lives of Bones”, my second Cycle film at the AFI Conservatory, was a particularly inspiring experience for me because of its spiritual content. Carolyn, a traumatized pregnant woman, is sent to Miss Netty, an old lady in the woods, to overcome her fear of violence and death in helping Netty with reassembling the bones animal skeletons. Including hunting and killing the animals that provide for their food and shelter, as well as singing over their bones to release their souls from suffering. And by that, Carolyn learns to let go of her horrible past and acknowledge the Circle of Life and Death.

This Cycle I was very excited about my cast: Amanda C. Miller as Carolyn and Nancy Magathan as Miss Netty had a great chemistry and a deep devotion to the story. My amazing ensamble is completed by supporting actors Noshir Dalal and Sonny Valicenti. I worked through a tight prep schedule this time around, just so I could have three days of rehearsals with the actors before shooting. That turned out to be very helpful because of our limited shooting time of only three days! A day less than Cycle One because we are expected to be better prepared by now and thus moving faster during our shooting days. It was great to have that extra rehearsal time to explore the characters and make a connection with my cast. It makes all the difference in the world when actors can trust you and feel comfortable in bringing out their deepest feelings in front of you and the camera. Especially if you have to move quickly to make your day it is very important to have your actors prepared. Having gone through a class in practicing the Meisner’s acting technique with our directing teacher Rob Spera, I got a better feeling of what an actor goes through in their emotional preparation, so I felt like I had the appropriate understanding to lead them.

Inspired by the Baba Yaga tale “Vasilisa prekrasnaya” (‘Vasilisa the beautiful’), Netty’s appearance and her cabin were loaded with symbolic elements of nature, life and death: Chicken feet, jars with mushy and undefined contents and a crackling fireplace illuminating a small adobe cabin in the middle of the woods. Those are the first things we see of Netty’s home, a place without modern technology and the buzz of the industrialized world. And to make this world more believable, we had a bunch of cute animals on set! There was pair of hens that we saved from their fate at a slaughter house, who were very calm and easy to handle! Clucking their way on fake grass on the stage, Henrietta and Abigail were natural talents! So were our two baby goats that rehearsed their dialogue with one of our writers (who was also the official animal wrangler on set). They gave a great performance talking to each other in Netty’s kitchen! Last but not least, there was a bunny that was so considerate of his flawless appearance that he kept licking off our fake blood (made of syrup and food color), because he was supposed to be dying in the woods! But we forgave him his vanity, because he was so fluffy! It is common film school knowledge that weapons, kids and animals are hard to shoot with – so I guess we were very lucky with our furry cast!

Netty’s special world needed to be built from scratch on stage – something I had never dealt with before. Admittedly, it was a little scary to have nothing to look at in preparation apart from  blueprints of the planned set. Nothing palpable to walk through before you start going into production! But film is all about imagination and as soon as you let go and trust your team to make it happen, you’ll be rewarded. It was a very ambitious set and took a lot of helping hands to get it into shape, but it also made the team stick together. I guess it is a good sign if the whole crew stays after the last shot is completed to help striking the set! I was very moved when I realized that everyone wanted to give their best for the story I wanted to tell. Striking a set as a team was a liberating experience, seeing all our hard work being torn down, rolled up and cleaned out. A collective cleansing experience, just like in the film, when Miss Netty cleanses the soul in her bones so it is ready to move on to the next world. In our case, the editing room!